The home of Rangers Football Club 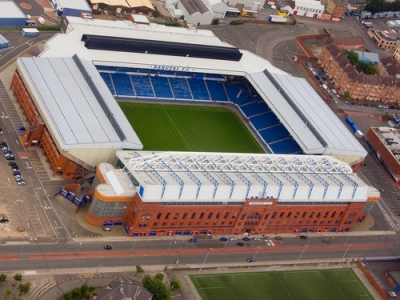 Ibrox is a UEFA Elite Stadium

Ibrox is a UEFA Category 2 Stadium

Map showing the location of Ibrox in Scotland.

Shabby and badlynindeed of a refurb. Roof leaking into buckets, seats are all mismatched and faded. May have been impressive when it was rebuilt 40 years ago but is currently the third best stadium I have visited in the city
By Dave Jones on 08/09/2018
Ibrox is an institution, the atmosphere is second to none. A lot of world class players who have played there have said it%u2019s one of the best if not best atmospheres you will ever experience. To my knowledge the old lady is now getting money spent on her to bring her up to scratch again. 5 Star
By Craigy boy on 13/08/2018
Best atmosphere best stadium in the world ever we are the people
By William armstrong on 27/08/2017
Ibrox needs a good refurbishment
On 03/04/2017
This stadium is 5 star rated for a reason. It's an absolute cathedral of football and when you go on match days or lucky enough to take a stadium tour, you can't help but sense the history and traditions of this legendary and iconic footballing institution. A truly wonderful footballing arena and football club. If you have the chance, visit this stadium. One trip and you will be hooked for life.
By Jaffa on 13/12/2016
What a complete dump! From the surrounding area to the actual stadium it was like taking a step back to the 1970s. The stadium is dirty looking from the outside and inside there's buckets collecting water from leaks in the roof. The seats are look about 50 years old and used to be blue, now they are faded and shabby looking. I'm glad I have visited Ibrox as it was something I wanted to do since I was a kid but I was VERY disappointed and when I e-mailed them about it all I got was a cheeky reply. I've been at stadiums all over the UK and Europe and Ibrox is about level with an English League One side, just because it holds 50,000 doesn't mean it is a good stadium. Dilapidated doesn't even cover it, such a shame
By Big Al The Gooner on 13/10/2016
Beautiful stadium. The front has been preserved and has the original rd bricks and an amazing sight. Great atmosphere inside. Has been built to last unlike some of the more modern stadiums.
By Sean Malloney on 11/10/2015
Visited both Ibrox and Celtic Park on a recent visit to Glasgow and I have to admit, Ibrox is by far the poor relation. The club's current financial woes have left the stadium in almost a state of disrepair. From the toilets that looked liked they had not been cleaned in months to the leaking roofs, the stadium is a poor reflection of past glories.
By SD on 19/02/2015
The best and the pre eminent football stadium in Scotland and remains so. Built in response partly to tragedy and also as a statement of intent ! Main stand is a work of art and simply stunning to behold and always demands a gasp of wonder on approach to the stadium ! Standards inside the stadium can be up to 5 star as regards catering , in general this stadium set the benchmark UK wide ,When the rest of British clubs were required to catch up , they came to see Ibrox ! The club deck 3rd tier of the Bill Struth Main Stand cost £21 million , whole re development of Celtic Park £17.5 million and it shows !
By Scottish But proud to be Briti on 03/03/2014
The 'Old Lady of Edmiston Drive' is a truly great footballing arena. The beautiful red brick facade of the Main Stand is instantly recognisable, and the marble staircase that greets you as you go throught the front doors is stunning.
On 08/02/2014
Compared to this Celtic park looks like a building site. Was up at Ibrox to watch Man UTD. Good atmosphere.
On 10/12/2012
The "old lady" is a very special place - always enjoy my visits whether a match day or not. If you ever get the chance to go never decline you will never forget the experience.
By An old Bear on 26/11/2012
Went on a tour and amazing inside an outside and the best atmosphere a stadium can have
By Lloyd gebbie on 14/08/2012
None too shabby for a Third Division club
On 06/08/2012
Top class stadium, masterpiece and the atmosphere is hard to beat anywhere.
On 28/03/2012
GO GO man utd. this is the second best after old trafford
By antonio di marina on 01/05/2011
Top Stadium. Couldn't beleive any Scottish club had this standard of stadium, inside and out, including the inner concourses. Bowled over by incredible atmosphere. I support Man Utd and was at Ibrox for the Champions League match in November 2010. Better than all English Premiership stadiums other than Old Trafford.
By Swinton Red on 02/12/2010
total class;it blew me away
By jim mcomish on 16/08/2010
5 star stadium for a 5 star team
By Jordi on 12/03/2010
Ibrox was re-built in the late 70s-early 80s. after the tailor report most of the english club owners and chairman came to this stadium as it was classed as the benchmark at the time in british footbal. if you visit this stadium you will see why............it's stunning..........ouside and inside.
On 04/03/2010
Great stadium, main stand is a work of art, not many stadiums in this class with better main stand, hampden park is too far away from pitch and celtic park is cheap and ugly and the roof does not cover all the fans, no good for our whether conditions.
On 09/02/2010

You have the ability to request en edit to any of the details of Ibrox. You can do this by clicking on one of the options below.